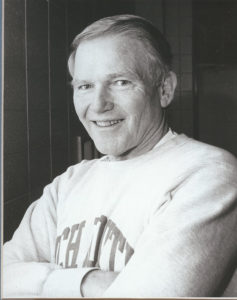 Ken began his career at Calumet High School in Chicago where he was a State Qualifier.

His collegiate days were at the University of Illinois, where he wrestled for Pat Patterson, a Hall of Famer, now deceased.

Upon graduation Ken entered the Military and served as a Sports Director for the 7th Army in Europe.

He started his teaching and coaching career at Rich Townships High School in 1959. In 1972, Rich South opened up and he was transferred to that school. During this entire time, he has been coaching football, wrestling for over 35 years.

As a wrestling coach, he has accumulated a dual meet record of 320-163. He has won 7 Regionals, 2 sectionals and 8 Conference Champions. He has had teams place in the top 10 in the State 4 times. He has had a number of State Qualifiers, which would include 10 place winners in state, two of who became National Champions. During this time Ken has organized, hosted and run over 100 tournaments.

In 1972, he was a Co-Founder of the SICA Wrestling Coaches Association. From time to time he has served as President, President-Elect; Secretary and Treasures, several times each.