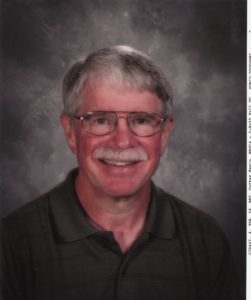 1984 saw the beginning of the end to two long “cherished” coaching activities: the recording of season-long wrestling stats on crumpled and coffee-stain legal pads (or a reasonable facsimile) and the joyful task of running and scoring an eight or sixteen team wrestling tournament with a simple pencil and some hand-written bout sheets. If you miss doing these tasks – or never had the opportunity to experience this labor-intensive activity – blame Kevin Cotter.

Kevin grew up in Flanagan, Illinois where he wrestled three years under the tutelage of Gary Close. Upon his graduation in 1971, Kevin enrolled in Eastern Illinois University where, in 1974, he earned his Bachelor’s degree in education. After a one year teaching assignment at Pecatonica, Kevin moved on to teach at Winnebago High School; it was at Winnebago that he took on the responsibility of assistant wrestling coach. After assisting for two years, Kevin accepted the responsibility of Head Coach. In 1979 Kevin left Winnebago and accepted a teaching and coaching position at Byron High School. For the next twenty plus years Kevin would assist, at first, Hall of Famer Glen Dallman and then Bob Baker in the development of a powerful Byron wrestling program. During his tenure as an assistant coach in the Byron program the Byron Tigers won eight Conference Championships, ten IHSA Regional Championships and two IHSA Sectional Championships. They appeared in the Elite Eight of the IHSA Dual Team Championships seven times, placing 2nd in 1999 and 1st in 1995.

During this era, with some prodding by Glen Dallman, Kevin set about the task of creating a computerized system for compiling wrestling statistics and running multiple-team wrestling tournaments – thus was born Preferred Educational Software and its two highly utilized wrestling programs: Champion Wrestling Stats and The Wrestling Tourney. Today, over 6000 schools across the country and the world employ this software – this includes the Illinois High School Association which uses The Wrestling Tournament as the official software for the Individual State Tournament series.

Kevin, after serving the last twenty years of his career as Byron’s Technology Coordinator as well as assistant wrestling coach, retired in 2007 to enjoy a mixture of a little fishing, canoeing, chess and, of course, some golf.