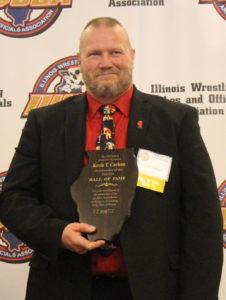 Kevin Carlson started wrestling his freshman year at Glenbard East High School. In 1981, as a senior he would win the Illinois High School State Championship at 185 pounds. After his senior year, he wrestled for two years at University of Northern Iowa. His third year, he transferred to College of DuPage where he wrestled for Hall of Fame coach Al Kaltofen and Hall of Fame coach Dave Eberhard. At the end of this season he was a 1984 NJCAA National qualifier at 190 pounds. He wrestled that summer in the Jr. Pan Am Games in Mexico City, Mexico earning a Gold medal in Greco Roman and a Silver medal in Freestyle. After that season, he wrestled two years at Indiana State University where he was a 1986 NCAA Division 1 National qualifier and competed at the Nationals at the University of Iowa.

Kevin’s goal after his competitive career was to go back to his alma mater and try to develop his own State Champion(s). After two years at Willowbrook High school assisting IWCOA Hall of Fame coach Chuck Rossetti and four years at McHenry High School working with coach Mike Hurckes, he finally made it back to Glenbard East. In 1998 after three seasons coaching at the lower levels, Kevin was hired as the head wrestling coach. This is his 20th season as the Rams head coach. He has a record of 255 – 171 with one Regional Championship in 2010 and Upstate Eight Conference Championships in 2016 and 2017. He has produced 24 Conference Champions in the DuPage Valley Conference and the Upstate Eight Conference. He has coached 31 Regional Champions and 9 Sectional Champions. He has coached 34 state qualifiers of which 12 have become medalists. One was a finalist (Pat Walker, son to Hall of Fame Coach Jim Walker) which got him back to the Grand March for the first time in 27 years.

After coaching a few years Kevin realized that having a State Champion was not the number one goal. It was getting as many kids involved in the sport and making responsible adults out of them. The Glenbard East wrestling team has had over 100 members in each of the last eight years. He stresses character, sportsmanship and loyalty in the program. Every 4-year wrestler gets his name on the “Wall of Fame” known as “Carlson Crusaders”. To date, he has 165 young adults on the wall.

One of his proudest moments is still the 2013 season, in which, he had 7 state qualifiers. His daughter Kennedie, still to this day, takes the credit as she was right by his side as his wrestling team manager.