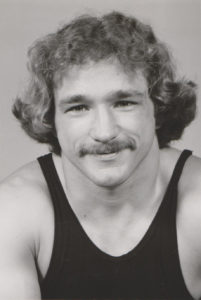 A four time state qualifier for Romeoville High School and Bolingbrook High School, King Mueller was a two time state champion and placed third as a sophomore. King wrestle for Romeoville as a freshman and sophomore and then when to the newly opened Bolingbrook High School for his junior and senior year. He had a record of 13-3 at the state tournament and had a career mark of 121-3-1 and never lost a match outside of the state tournament. He was named the I.W.C.O.A. Outstanding wrestler in 1976 and was a High School All-American.

King attend the University of Iowa he finished second in the Big Ten and was a NCAA Division I All-American, placing third in 1979. He was voted Most Courageous Wrestler on the Iowa team in 1980. Continued knee injuries hampered his amount of competition his senior year. He continued his competition, in spite of his injuries, and he earned a 5th place ranking by FILA. After that point his mounting injuries caused him to retire from active wrestling.

King presently coaches at North Platte High School in Nebraska. Since 1995 he has coached sixty-three state qualifiers and twenty-four state place winners. He also has spent the past fifteen years in the field of law enforcement, first with the Nebraska State Police and presently with the North Platte Police Department.