Kip Crandall is a 1984 Tremont High School graduate where he played football and wrestled each for four years.  As a football player, under head coach Tim Ruwe, he was an accomplished offensive lineman and linebacker.  He was a three-year varsity letter winner and received all-conference recognition at both positions during his junior and senior seasons.  He was also named to the all-area team as an offensive lineman his senior season.  As a wrestler in high school, Kip was a four-year varsity letter winner accumulating a record of 73 wins – 38 losses and 2 ties.  He was as sectional qualifier as a sophomore.  Kip was 19-0 during his junior year when he suffered a season ending broken ankle which caused him to miss the state series.  Motivated by the disappointment from his junior season, he put in the work suggested by his high school coach, Dale Schaidle.  The advice was the need for Kip to develop more offense on his feet.  So, he and teammate Russ Witzig, (fellow Class of 2022 Inductee) spent 45 minutes before school every morning drilling takedowns.  This proved to be the key as Kip wound up going 34-3-1 his senior year and capturing the Class A 185 lb. state championship.  Kip is also a member of the Tremont Athletic Hall of Fame.

Kip continued his football and wrestling careers while attending Millikin University, where he was a 1989 graduate with a degree in secondary education.  As a football player at Millikin, under head coach Carl Poelker, he was a three time All College Conference of Illinois and Wisconsin (CCIW) offensive lineman and twice named to the GTE All American team.  As a wrestler at Millikin, under the guidance of head coach Mike Poe, Kip amassed a career record of 101-11.  He was a four-time CCIW HWT. Champion and four-time Division III national qualifier.  He ended his wrestling career at Millikin with a heartbreaking 2-3 loss in the 1988 HWT. National championship match.  Kip was inducted into Millikin’s Athletic Hall of Fame in 1994.

Kip’s first head coaching position was at Burlington Central High School, where he spent eleven seasons.  During that time, he spent several years as an IWCOA board member culminating with being the fundraising chair for several years.  He inherited a program at Central that was only two years old upon his arrival and had eight wrestlers in the program.  Over the course of his eleven years at Central, he was able to build the program into a respected opponent.  This included starting the Rockets Junior Wrestling Club and getting the right junior high coach in place.  For the first several years, Kip would end his high school practices and then drive to a different location to coach club practices.  After a few years, he was fortunate to be able to hire a quality junior high coach.  Kip’s overall record at Burlington was 133 wins, 104 losses and 5 ties.  In those eleven years, Central had sixteen state qualifiers, six of those in his last season at Burlington.

After his tenure at Burlington Central, Kip took an administrative position in the Oregon school district.  For the first six years at Oregon, he was athletic director and assistant high school principal.  In his seventh year, he took the position of junior high school principal where he remains today.  Just prior to the 2016-17 wrestling season, athletic director Mike Lawton approached Kip to see if he would be interested in assuming the head wrestling position due to a late resignation.  Over the course of five years, before handing the program over to longtime assistant Justin Lahman this year, Kip’s overall dual record stood at 89 wins and 69 losses.  He and his staff were able to produce nine state qualifiers during those five years with seven of them placing, including a runner up finish.  He currently remains as an assistant in the Oregon program, thankful for every year moving forward he can remain a part of the action.

When not involved at school, coaching wrestling or his hobbies of following NCAA football and wrestling, Kip helps his wife Nancy with her youth ministry programs.  Together they have lead youth in both Sycamore and Oregon on sixteen plus mission trips and countless community service projects.  They recently launched the Dangerous Hope Missions group at the Oregon United Methodist Church, which provides community service opportunities for youth and adults alike. 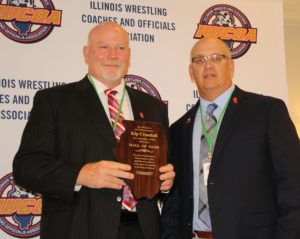