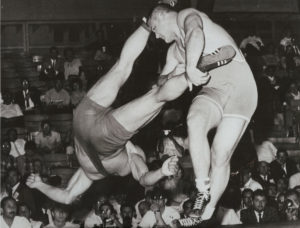 Larry has had the unique experience of being a 1 man team entry into the State Districts. He won the 3rd District, placed 2nd Sectional and 2nd in the State. He was best known as an All-State Football Player. This was his leverage into college. He played football at Southern Illinois for 2 years before devoting his entire attention to wrestling. During his collegiate days, he Won two NCAA College Division championships and placed 2nd in the University Division. After graduation he continued his wrestling and became one of the United States leading wrestlers. He has won the National AAU 11 times; The National Federation 4 times; The Midlands 4 times; The Pan American Games once and Placed 2nd in the Worlds Games 3 times; Placed 3rd in the World Games twice; Placed 4th and 5th in the Olympic Games.

As a coach at Southern Illinois at Edwardsville where he started the program, he has produced 16 All Americans. As a Team they have placed 3rd, 2nd and 6th in the Division II. In 1974 he was named Coach of the Year in Division I. He was recently named to coach the United States World Cup Team for the 2nd straight year and has been invited to coach the 1976 Olympic Team.