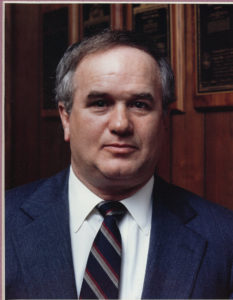 Larry began his wrestling career at Joliet twp. High School under the coaching of Perry Goransen. He was a 2 time State Qualifier. After graduation, he entered the United States Marine Corps where he boxed and Wrestled. After his service ended he began working in the Joliet area.

1967 found the Joliet Boys club’s Wrestling program, which had just begun, lacking a coach due to a death. Larry responded to the call and joined up with this club immediately and continued to be extremely active until 1978, when he began to follow his own son’s progress, however always remaining in the background and supporting the Club, assisting at the YMCA and Tournament.

* 1972 he coached US Team in the first Pan AM youth championships held in Mexico City, US won the tournament, 7 champions, 2 2nd’s and 3rd of all 10 weight classes