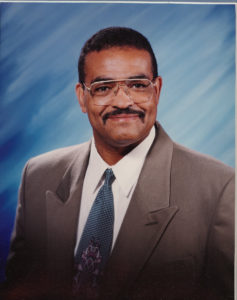 Larry started out at Cahokia High School, where he was on the Varsity for two years and both years Regional Champion.

His collegiate days were at the Air Force Academy, where he has the Mountain Intercollegiate Champion and a NCAA Qualifier.

After the Military Service was completed, Larry came home to Cahokia and revived a wrestling Program that had been dropped 6 years earlier.

During his Coaching stint at Cahokia, Larry produced 5 Regional Champion­ ship teams; 2 Second Place Sectional teams; 1 Team Sectional and 3rd Place in the State Individual Finals in 1973. His Dual Meet Record was 128-45. He had numerous State Qualifiers, with 7 of them being individual place winners.

Larry was named Metro East Coach of the Year 3 times. He Coached the Team Illinois at the National Junior Free Style Championships in 1973. He was also the Southern Free Style Representative for 6 years. After he was promoted to Athletic Director, he remained as an assistant for 3 more years.

He became an assistant principal from 1977 to 1988 and from 1988 to the present date he has been Principal at Cahokia High School.