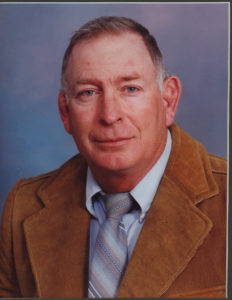 Skip began his wrestling career at Pekin High School for Hall of Famer James Custer where he was a State Qualifier also Conference, Regional and Sectional Champion.

His collegiate days were spent at Illinois State University for Hall of Famer Gene Hill.

His teaching days began at Peoria Limestone and from there to Gardner-Wilmington. In 1964 Skip move to Rich East high School, where he is still teaching and coaching, serving as the Head Coach since 1972.

Skip spent a number of years of activity in the Illinois wrestling federations. He has been an assistant coach in the junior free style and has been in charge of cultural exchanges early on for 10 years. He has had 2 Greco-Roman Champions, 2 free style Champions and 3 seconds. He has had 4 United States Wrestling Federation Champions and has had 6 young men go on to earn All American Honors in college.

* He has been President of the SICA Conference and Secretary

* He has been an official at the National Free Style Tournament

* He has been Team Leader for Cultural Exchange

* He has been a member of the Cultural Exchange Study Group at Lenin Institute of Physical Culture, Moscow, USSR in which Free Style Wrestling and training techniques were studied.

* He has been a Clinician at the Champ Builders Wrestling Camp