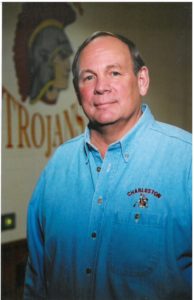 In 1952 Lew Hankenson was introduced to the sport of wrestling by his father, Homer, who was an assistant for Ott Bay at Waukegan High School. He competed in football, wrestling, and track & field all four years at Zion-Benton High School and was captain of all three sports his senior year.

Lew moved to Charleston in 1972 and took a position as an assistant football coach. Charleston did not have wrestling at the time. In 1973 he assisted Renny Garshelis in the development of a youth wrestling program for elementary and junior high school students. He served as an assistant from 1974-1976 when Charleston began its wrestling program and then coached the intramural program from 1976-1980 until budget cuts forced the dropping of the Charleston program. From 1980-1986 he served as the volunteer head coach for the high school wrestling club.

In 1986 wrestling became a funded sport at Charleston, and Lew continued serving as the head coach. He coached three state qualifiers and two place winners. Three wrestlers competed for Team Illinois in the Junior Nations.