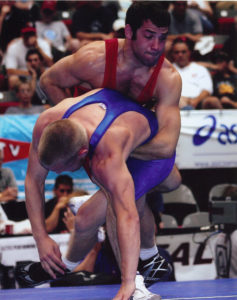 Lindsey Durlacher graduated from Buffalo Grove High School in 1992. He won the State Championship during his senior year and wrestled for Hall of Famer Bob Tipsword. He also claimed the 1991 Wisconsin State Championship while attending Wayland Academy. He was a 1992 ASICS Tiger First Team All-American. He also lettered in gymnastics and soccer in high school.

He went on to attend the University of Illinois to compete for Hall of Famer Mark Johnson. He was 1997 NCAA Runner-up and placed fourth in 1996. He earned a degree in Sports Management.

In 1006 Lindsey won the bronze medal at the Greco-Roman World Championships. He was also a World Team member in 2005.

Other career highlights include:

Lindsey is a resident athlete at the U.S. Olympic Training Center. He formerly was an assistant wrestling coach at U.S. Naval Academy, Northern Illinois University and Northwestern University.