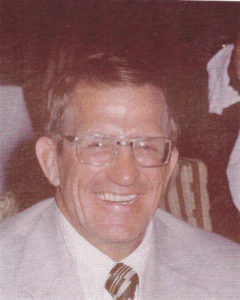 Born in Taylor Ridge, IL in 1934, Lloyd Corwin later attended Rock Island High School. He graduated from Rock Island in 1952 after wrestling for Kenneth Greene. Lloyd was a sectional champion in 1951 & 1952. He placed 3rd in the state in 1951 and won the state championship in 1952. He shut out all four opponents on the way to his title. He was elected captain and most valuable wrestler of the Rock Island wrestling team. Lloyd also played football at Rock Island and was named 2nd team All-Conference.

Lloyd was inducted into the Rock Island Senior High School Hall of Fame.

After high school, Lloyd went on to attend Cornel College in Mount Vernon, Iowa. Coached by Charles Bryant, Lloyd compiled a record of 80 wins against 8 loses. Lloyd placed 3rd in the NCAA National Championships in 1954 and finished 2nd in 1955. In 1956 he was 18-0 but became ill in the early rounds of the NCAA and was forced to withdraw from the tournament.

Lloyd competed in the 1956 Olympic Trials and became an alternate on the 1956 team.

Lloyd was inducted into the Cornell College Sports Hall of Fame in 1984.

In 1956 Lloyd coached at Madelia High School in Minnesota. He took his teams to the conference wrestling titles five times. He started a grade school wrestling program which ultimately lead to wrestlers advancing to conference and state titles. He moved on to Howe Military School for one year and then went to United Township High School in East Moline. During his five years at United Township he served as a teacher, coach and athletic director.

Following his teaching and coaching career, Lloyd moved into the business sector. This business career led him to Mutual of New York Insurance. While in the insurance business Lloyd qualified for the President’s Council five years, qualified for the Million Dollar Round Table and was named to the Mutual of New York’s Hall of Fame in 1973. He appeared in Time Magazine and later became Asst. Manager and ultimately Manager of the Davenport, IA agency.

Lloyd was elected and served for 12 years as 23rd District County Board Member for Rock Island, IL.

Upon retirement from business, Lloyd had become owner of Corwin’s Thunder Hill Stable. He, along with his wife of 57 years, Darlene and five daughters and their families, own and train 20 American Saddlebred Horses. They have shown horses by riding and driving in top notch shows in many states.