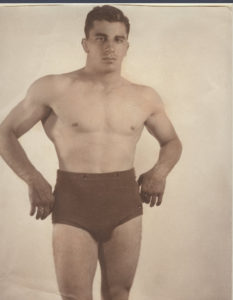 He did not begin his Collegiate Wrestling career until he was 28 years old and after World War II.

The in between times, while he was saving money to go to school and serving his country, he still worked out on the mats.

He finally got to enter Illinois University in 1945 after the War had ended. There he wrestled for the Hall of Famer Hek Kenney. His abilities were notable immediately as he won the Big 10 Championship in 1946 and Placed 2nd in the NCAA at 128. He won the Big 10 Champion ship again in 1947 and again placed 2n d in the NCAA at 128. In 1948 Lou elected to forego the Big 10 and NCAA to concentrate on the Olympics, where he was a qualifier. He won the National AAU in 1948.

Money now entered the picture again with Lou dropping out of school. He finally returned in 1951. In 1952 he placed 2nd in the Big 10 and Placed 3rd in the NCAA 1 s and finally in 1953 with age catching up, Lou finished his career by placing 4th in the Big 10.

During his wrestling career, Lou was on two Illinois Big Ten Championship teams.

Until his retirement, Lou had been serving as the Chief of Physical Therapists at Hines Veterans Memorial Hospital in Maywood.

Lou was a well-known Official for 25 years in and around the Chicago Area, both High School and College.