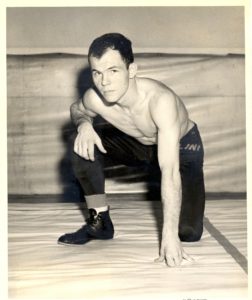 Richard Meeks began his Wrestling Career at Champaign High School for Hall of Famer Roy Swindell. He was Conference, Regional and Sectional Champion for 3 years and was All State 3 times.

His Collegiate days were spent at Illinois University for Hall of Famer, Pat Patterson where he was a 3 time Big 10 Place winner and a 3 time All-American.

He was also the Chicago AAU Champion and qualified for the Pan American Games in Mexico City, but was unable to attend due to finances.

He had an opportunity to compete in the 1956 Olympics, but due to his commitment to his career choice, the United States Air Force, he was unable to compete.

Major Meeks spent 21 years in the Air Force, flying mostly fighters and Transports. While in Vietnam, he was awarded 20 Air Medals which are conferred upon fighter pilots on the ratio of 1 to every 10 combat flights. He received the Distinguished Flying Cross Twice. In all he spent 5 years in Vietnam.

Major Meeks in retirement has put his energies into remodeling work and developing small factories in Florida.