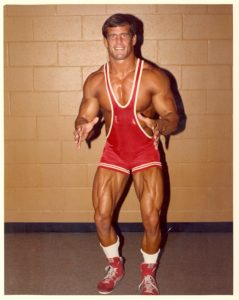 Mark began his wrestling at Rock Island Alleman High School where he finished second in the State. In 1973 he was the USWF Free Style Champion.

His Collegiate Wrestling was at Michigan University where he Captain his team. He Finished 2nd Twice in the Big 10 Championships and Twice he was the Runner Up in the NCAA Division I National Championships, losing all four times to the same Wrestler.

During his collegiate years he was selected to wrestle in The East-West All Star Meet, losing to the same man who defeated him previously.

Post College found him training with various clubs: He placed Fourth in the World in Greco Roman in 1978; National Greco-Roman Champion in 1978, 1979 and again in 1980; He was Second in the World Cup in Greco-Roman in 1981. One of his greatest Achievements was making the 1980 United States Olympic Greco-Roman Team, only to experience the disappointment of not being able to compete.

Presently Mark is completing his Fifth year as the Assistant Coach at the University of Iowa. The Past Three Years as the Number One Assistant. In his 5 years at Iowa University they have won 4 National Titles and this year finishing as Runner-Up. They have also Won 5 Big Ten Championships.

For his efforts as an Assistant Coach, Mark was name d the Division I Assistant Wrestling Coach of the Year for 1986.