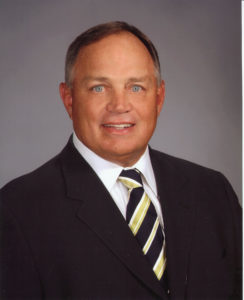 Mark began his Wrestling career at DeKalb High School, where he wrestled for hall of Famer Don Flavin and his assistant Hall of Famer Wayne Miller. He was a member of their 1968 State Championship Team.

His Coaching career began at Lyons Township High School in 197 with the sophomores. In 1974 he moved to the Varsity Head Position.

Mark has coached 53 State Qualifiers, 17 were Place winners and 4 of them were Champions. His overall Dual Meet Record is 303-111-6.

He was named Class AA Wrestling Coach of the Year in 1992.

Mark has supported and served as an officer in the H1COA for 20 years. He has been Treasurer, Vice President and in 1980-81 he served as the IWCOA President. He has been involved with IWF activities since 1972 1 the past 3 years he has been an assistant coach at the National Junior Camp and Nationals.

Mark has also directed the Lions wrestling Club in the IKWF for 15 years.

Mark King began his wrestling career at DeKalb High School, where he wrestled for Hall of Famer Don Flavin. He was member of their State Championship Team in 1968.

His coaching career began at Lyons Township High School in 1972 as the sophomore coach. In 1974, he was named the Head Coach at Lyons Township. In his thirty-one years as head coach, Mark’s teams have won 470 dual meets, eighteen conference titles, thirteen regional championships, and three sectional crowns. He has coached ninety state qualifiers, thirty-five state place-winners, including six individual state champions. Mark has also served as the director and coach for the Lions Wrestling Kids Club for twenty­ five years.

Mark has also served as the head coach or assistant coach for Team Illinois freestyle wrestling team to the junior or cadet nationals for fifteen years. He is also active with-in the IWCOA, having served as treasurer, vice-president and president. He is currently a member of the IWCOA Hall of Fame Selection Committee.

In 1994, Mark was inducted into the IWCOA Hall of Fame and in 2002 he served as Grand Marshal for the I.H.S.A Individual State Tournament. He was selected IWCOA Coach of the year in 1992.