From 1937 through 1969, in the history of the Illinois State Wrestling tournament, there were only three 3x state champions. Two-time state champions were also a rarity. Most wrestlers then, began their careers as 9th graders.

Contrasting that, today’s youth wrestling programs have greatly increased the quality of wrestling and we see it with multiple three- and four-time place winners and champions.

Mark Malley began his wrestling career as a freshman at Stephen Decatur HS. He wrestled for Terry Simons, a future member of the IWCOA Hall of Fame. Mark became a varsity starter toward the end of that first season, losing in the Granite City sectional and ending that season with 3 losses. It was in that year that his mentor, Cliff Sheets, a future member of the Illinois Wrestling Coaches and Officials Association Hall of Fame, gave Mark an 8x9 wrestling mat made up of pipe insulation material. From then on, Mark began dedicating himself to learning the sport. His 10th grade year ended with a loss in the first round of State ending his season with a 25-2 record.

That summer he wrestled at 143 lbs. in the state freestyle tournament. His weight class included the wrestler who beat him at the HS State tourney, 2 other state champions and 2 future state HS champions. After sweeping that weight class, Coach Elias George, another Hall of Fame member from Evanston HS, took Malley under his wing.

He worked out at Evanston, Northwestern, and the Mayor Daly Youth Foundation at Navy Pier. He won the summer State freestyle tournament again the following year. Mark ended his next two HS seasons with 29-0 and 33-0 records and IHSA state championships at 145 lbs. in both 1968 and 1969. In addition, his Stephen Decatur wrestling teams would win District titles in 67, 68 and 69 and would place 3rd and 4th in the state in 68 and 69 respectively. In the summer after his junior year, Mark was named the Outstanding Wrestler at the High School National Freestyle tournament held in CA.

In addition to wrestling, Mark was president of his HS student council, All-City, All Conference and honorable mention All-State in football and captain of his baseball team, hitting in the .300s and .400s in high school and in their summer league.

He earned a full scholarship to Michigan State University, which at the time was the Big 10 power, winning 7 straight Big 10 titles in the late 60s and early 70s. His sophomore year he defeated the NCAA runner up and eventual 2x champion, but his career was cut short due to surgery on an injury sustained in football.

After graduation from MSU, he served a 2-year Church mission for the Church of Jesus Christ of Latter-day Saints in Frankfurt, Germany. Mark then, partnered with a close friend and former state qualifier, starting a Contract Bond insurance firm in Naperville. Mark went on to earn an MBA from Northwestern.

Now retired, he again serves with his wife Victoria on another Church mission in California. He says, the friendships, the experiences, the lessons learned from wrestling are treasured and never to be forgotten. He expresses a deep thanks and appreciation to the IWCOA for being inducted into the hall of fame class of 2020. 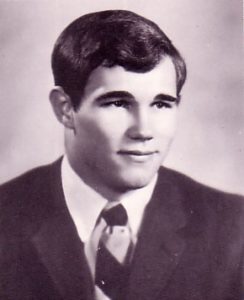