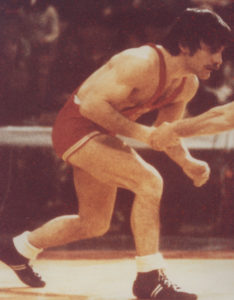 Mark began his career at Savanna High School, under the direction of Hall of Famer Charlie Anderson. While at Savanna, Mark won Two State Championships there were no classes.

His Collegiate Career was at Northwestern University, where he worked for Ken Kraft also a Hall of Famer. While at Northwestern, Mark won Two Big 10 Championships; Placed 5th in the Nationals and in 1973 won the Division I National Championship.

Mark also wrestled in the Midlands, where he placed 5 times and in 1976 he won the Midlands Championship. At that time he was ranked 2nd with the Most Wins at 126 in the Midlands – 25. That win number will still be in the top 3.

Mark was the Coach at Illinois State University before entering private business. He has been an active Member of the Advisory Board of the Wildcat Wrestling Club and has been for years a visual supporter of Illinois Wrestling.