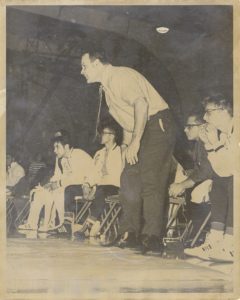 Marty was a State Champion from Quincy. Later as a wrestler for the University of Illinois, he placed 2nd, twice in the Big 10 and Captained the Team and was most valuable. Coaching at West Leyden has seen his teams develop into consistent contenders. They won 174 dual meets, lost 34 and tied 2 in his 22 years. He has had 9 place winner s in the State, with l champion.