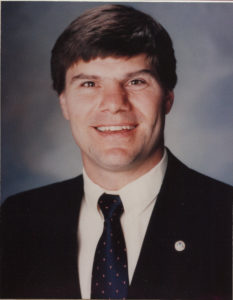 Marty started his career at Yorkville High School where under the direction of Hall of Famer, Dennis Hastert he won a State Championship and was named the outstanding wrestler in Class A.

He enrolled at the University of Illinois where he wrestled for 4 years, being named Captain of the team in his senior year. As a graduate Student at Illinois University, he helped both with the University Team and with Parkland Junior College.

His teaching and Coaching at the High School level, began with a short stint at Lisle and then on to Mahomet-Seymour where he was an assistant for 1 and a half years. As a head coach his record is unsurpassed, he had 51 State Qualifiers; 27 place winners of which 13 were Champions in Class A. His teams were 4th and Tied for 1st in the Individual Team Championships and in the Dual Championships his teams won Four State Championships; Placed 2nd and 3rd. They also won 8 Regionals; 7 Sectionals and 8 Conference Championships. Marty was named Class A Coach of the Year 4 different times.

Marty also was active in conducting IWF sponsored activities in his area along with being the deputy treasurer of the IHCOA.

Marty has moved to Harrison High School in Lafayette, Indiana where he is the Athletic Director of a larger high school