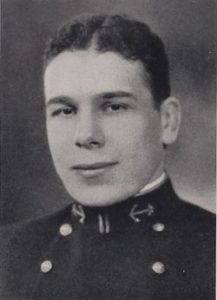 A chorus of yells rises from the bleachers, a multitude of pleas to “Go get ‘im, Murph,” “All right, Max, give ‘im the works!” and a determined-looking lad gets up from the bench, goes to the mat, and applies the pressure. Not much of a talker, this Max boy, but he certainly produces, not only on the wrestling mat, where he has shown himself one of Navy’s greatest wrestlers, but in his everyday intercourse with his classmates.

His attitude shows itself in his every action … on the mat he makes no grimaces, strikes no attitudes, but goes in and ties his man in more knots than a salty old bos’n could fathom. Wrestling, with its body-to-body contact, ranks with boxing in its capacity for developing the fighting man, not the showy type, but the persevering plugger. In the Service it’s the plugger, the square-shooter, that makes the best officer, and we’re all expecting Max, after he has thrown his last adversary on the mat, to continue winning his bouts with life in the Service.

He was runner-up at 158 pounds at the 1932 NCAAs. Silverstein was promoted through his Navy career. He was commissioned ensign on June 2, 1932 and went to sea in USS Chester (CA-27) on the 26th as an aircraft gunnery observer. He was promoted to Lieutenant (junior grade) on June 2, 1935 and subsequently served in Chaumont (AP-45), USS Tattnall (DD-125), and Seattle (CA-11). After being promoted to lieutenant on March 13, 1940, later changed to date from August 1, 1939, Lt. Silverstein reported for duty as Engineer and Damage Control Officer in USS Sims (DD-409). Max was lost when USS Sims (DD 409) was sunk by Japanese dive bombers on May 7, 1942 in the Battle of the Coral Sea. He was the ship’s engineer and damage control officer. On May 7, 1942, during the Battle of the Coral Sea, Sims came under aerial attack. Though knocked unconscious by the first bomb, Lt. Silverstein quickly recovered and “coolly directed the securing of the boilers, the jettisoning of topside weights to preserve stability and the preparations for repairs to save the vessel from sinking.” Lt. Silverstein died soon thereafter when Sims sank. For “his relentless determination and inspiring heroism . . . ,” Lt. Silverstein was posthumously awarded the Silver Star medal.

Memorial Hall within Bancroft Hall at the United State Naval Academy honors those Naval Academy alumni lost in combat or military operations in service to their country. Max is one of 52 members of the Class of 1932 in Memorial Hall. In Max’s honor, Silverstein (DE-534) was laid down on October 8, 1943 at the Boston Navy Yard, Boston, Massachusetts; launched on November 8, 1943; sponsored by Mrs. Ruth B. Silverstein; and commissioned on July 14, 1944, Lt. Comdr. F.A. Reece, Jr., USNR, in command.

Max was lost when USS Sims (DD 409) was sunk by Japanese dive bombers on May 7, 1942 in the Battle of the Coral Sea. He was the ship’s engineer and damage control officer.