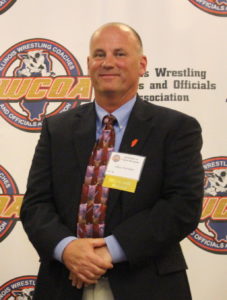 Mike was born on November 15, 1965 in McHenry, Illinois. Athletics was an integral part of the Hurckes family daily activities. With six older brothers, attending games, matches, and practices was a way of life. His love for the sport of wrestling began in high school. As a standout three-sport athlete, Mike was the first wrestling state qualifier to represent Johnsburg High School. A graduate of Monmouth College, Mike excelled in football during his four years and wrestled for two years.

Mike renewed his passion for wrestling when he became head coach at Forman High School in Manito, Illinois in 1988, a position he held for three years before moving to McHenry, IL. In four seasons as Head Coach of the McHenry Warriors, his teams dominated the Fox Valley Conference, winning 3 Conference championships, while losing only two Conference meets. Mike’s team finished undefeated 20-0 and ranked in the top ten in the 1994- 1995 season. During his 7 years as Head Coach, Mike and his teams amassed a 113-30 record, along with producing 13 state qualifiers and 3 state champions.

Mike transitioned from coaching to officiating after the 1994-1995 season, and is now completing his 23rd season as a state level wrestling official. Mike has officiated 11 IHSA State Finals and 7 IESA State Finals, while also serving as an IHSA Wrestling Rules Interpreter and Clinician. Mike’s knowledge, contributions and utilization of video technology plays an important role in educating and advancing other officials.