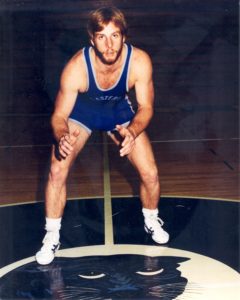 Michael began is Wrestling Career with the kids group called the Raiders. His High School Wrestling was at Riverside-Brookfield where he was a Two­Time State Qualifier. A strong influence was his father John, coach at MW.

His collegiate days were with Hall of Famer Ron Clinton at Eastern Illinois University where he qualified for the NCAA Division Two Nationals and Won Second.

Following Graduation, he Assisted Ron Clinton at Eastern while doing his graduate work. His High School Teaching-Coaching began at Providence Catholic where he assisted Hall of Famer Tim Ruettiger for Five Years, taking over the Providence Program in 1988. While at Providence as Head Coach, his teams were State Champions in 1989; second in 1990; Did Not Place in 1991 and Did Not Place in 1992. He was the IWCOA Coach of the Year in 1989. He had 35 State Qualifiers; 21 Place winners of which 6 were Champions. They Won 4 Regionals and 4 Sectionals as a Team.

Mike moved to Carl Sandburg in 1992, So far he has had 27 State Qualifiers, 8 Place winners with 1 Champion. They have Won Five SICA West Conference Championships and 6 Regionals. Combining the Two Schools, he has over 300 dual meet wins.

Mike has been a Coach on the Illinois Wrestling Federation Junior National Team for 13 years; He has been an IWF Wrestling Official for the same time.

In 1997, Mike was a Team Coach-Leader for the Illinois/Japan Exchange trip to Japan and in 1998 acted as Host/Leader for the Japanese on their trip to the United States.