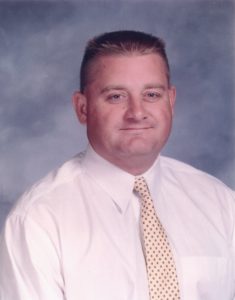 Mike got started with wrestling as a student at Eisenhower Junior High where he was coached by Hall of Famer Joe Pedersen. Mike enrolled at Montini Catholic High School following his graduation from Eisenhower. While at Montini he competed all four years under the guidance of Jim Izzo. Mike became a two-time conference champion, a team captain and a team MVP. Upon graduation from Montini, Mike attended North Central College in Naperville. Mike sought to wrestle at North Central but injury ended his wrestling career after a scant year and a half. In 1987 graduated from North Central with a degree in History/Education and sought employment as a teacher-coach.

Ultimately Mike returned to Montini Catholic as an assistant coach – a position he would hold for the next seven years. In 1994 Mike assumed the reins of the Bronco wrestling program as its Head Coach. During Mike’s tenure as Head Coach at Montini Catholic the Broncos have won 397 dual meets while losing but 35. In eleven of the fourteen years under the guidance of Mike Bukovsky the Montini squad has either qualified or placed in the IHSA State Dual Tournament. They were State Champions in Class A in 2000, 2002, 2003, 2004 and 2005; and State Champions in Class AA in 2008. In 2007 the Broncos finished in 2nd place in the Class AA Dual Team Tournament. Twice they placed third in the Class A Dual Team Tournament. Over this successful time span Mike’s teams have produced 113 State Qualifiers with 63 becoming medalists of which 24 were State Champions. Three of Mike’s wrestlers became four-time State Champions.

Under Mike’s leadership the Broncos have established themselves as a force throughout the state and have also garnered some national recognition. Several times Montini has been ranked among the nation’s Top Twenty programs; in 2006 the Broncos ended the season ranked 5th nationally. In recognition of his success Mike has been twice honored by the IWCOA as Class A Coach-of-the-Year.

As the Admissions Director and Head Wrestling Coach at Montini Catholic, Mike’s day is a busy one. Yet he finds the time to give back to the sport by serving on the IWCOA Executive Board, helping to organize the Indiana-Illinois Classic Duals and many other wrestling related endeavors. Currently Mike serves as the President of the IWCOA.