A native of Rochelle, IL, Nate Kessen has been an IHSA and USAW official for 19 years.  His love for the sport began before birth, when his mother Connie would attend his uncle Chuck’s high school wrestling matches during the 1981-82 wrestling season.  The family love of the sport was passed on at that point.  He was an IKWF and IWCOA Fresh/Soph state place winner. Nate wrestled under head coach Tom Mahoney at Rochelle Township High School, becoming a three-time all-conference, all-area and 2000 IHSA AA state qualifier along the way.  Nate went on to wrestle for Truman State University and Northern Illinois University.  He coached with the Rochelle Wrestling Club during his junior and senior high school seasons and at Rochelle Middle School for two seasons after wrestling in college, serving one year as head coach where he entered the school into its first ever IESA state championships, coaching four state qualifiers along the way.  Nate was a unanimous first team all-conference and all-area football player for Rochelle, playing on teams that went 22-2 and making it to the IHSA state semifinals.  In 2018, Kessen was inducted into the Rochelle Township High School Athletic Hall of Fame.

Nate graduated from Northern Illinois University with a Bachelor of Science in Business Administration (BSBA) degree and entered the business world in 2005, causing him to shift his wrestling focus to officiating while he balanced the demands of his professional responsibilities with his love for wrestling.  He has worked 12 high school state finals (9 as a mat official and 3 as coordinator of officials), 14 regionals, 10 3A sectionals, 1 2A sectional and 6 dual team sectionals.  Nate has served as state tournament coordinator of officials twice for the IHSA, including the inaugural IHSA girls state tournament, and assumed the role for the entire IWCOA state series in June of 2021.  In addition, Nate has officiated many girls, fresh/soph and kids state championships and qualifiers along the way.  He also serves as the head official for the annual IWCOA Girls & Fresh/Soph state tournaments.  Kessen currently serves as an IHSA wrestling clinician (trainer) and rule interpreter. Nate has been heavily involved in recruiting new officials and hosting beginner official training classes in the west suburbs.  He has been voted as an Illinois Wrestling Coaches and Officials Association wrestling official of the year finalist three-times and won the award in 2019.  Nate was also the 2018 NFHS Official of the Year for Illinois.  In 2021, Kessen was selected to serve on the IHSA wrestling advisory committee and will assume that responsibility thru spring of 2024.

Kessen has served on the IWCOA Executive Board since 2010, being selected as Board Member of the Year in 2016.  The 2020-21 Illinois Wrestling Person of the Year, Kessen currently serves as the IWCOA president-elect, membership chair, and publicity chair in addition to serving on several other committees.  Over the past 12 years, he has made a significant impact to the development of the organization; some of which include filing and securing the organization’s 501(c)3 status, developing the iwcoa.net website, authoring the annual 130+ page IWCOA banquet programs, and previously serving as the IWCOA secretary.

In summer of 2020, Kessen worked with three head wrestling coaches (Chris McGrath of Downers Grove North, Josh Oster of Lockport, and Nick Miller of Washington) to organize a committee to investigate the impact of COVID-19 mandates on wrestling within Illinois. The four of these men thoroughly evaluated the IDPH measures and criteria; surveyed coaches, officials, and administrators; then developed and proposed a plan to the IHSA board of directors and administration that would allow for a season to be held in the spring versus being cancelled in the winter. The plan ended up working out very well considering the circumstances, given the restrictions and approach taken by Illinois government leaders. Two months after the proposal presentation, the IHSA announced the schedule for the 2020-21 season which included no state series would be held and moving to a spring competition season.  This triggered the IWCOA executive board to develop a special committee that would ultimately be led by Rob Porter which culminated in a full regional, sectional, and state tournament experience for all high school wrestlers. Nate worked closely with the committee leaders to identify a promotion plan and streaming partner. In addition, Nate partnered with IWCOA Hall of Fame official Dan Fulscher to assign officials for the entire series of 42 tournaments (305+ individual assignments) and then worked all five tournaments for six days straight during the weeklong events in Springfield.  Nate thoroughly enjoyed the countless hours spent with all of the 2021 IWCOA state championship sub-committee members and contributors to ensure that wrestlers had the opportunity to achieve their goals and fulfill their dreams of wrestling for a state title.

For the past 17 years Nate has worked for different operating companies within the Allegis Group.  Currently, he serves as director of client operations for Actalent, a $2.5B engineering & sciences consulting services organization.

Nate resides in Sugar Grove, IL with his wife Tracy and three daughters (Kylie, Sydney, and Quincy).   He would like to thank his family for their support and sacrifice which allows him to stay close to the great sport of wrestling. 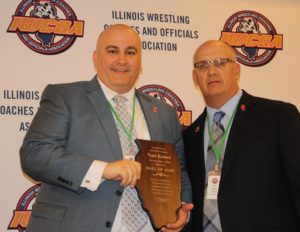