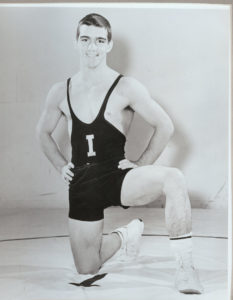 Norm began his wrestling career at Highland Park High School, where he was 2nd in the state his senior year. He enrolled at Iowa University as a walk on. While at Iowa in an era where you could only compete for 3 years, Norm won two Big 10 titles and finished in 2nd the other time. His second place finish was a default due to an injury, so you could say that Norm was never defeated in the Big 10 Championships. His senior year he was the captain of the team and the OW in the Big 10’s. In his last two years he was undefeated for the season, during the duals and Big 10.

After graduation from Iowa University, Norm came to Chicago where he began teaching in the elementary system. He stayed active in wrestling with the Mayor Daley Club, winning various local tournaments and twice placing 2nd in the Midlands. His high school coaching actually started at Oak Lawn High School as an assistant to Hall of Famer Jim Craig. While in teaching in Chicago, he helped at various high schools, including Lake View with Hall of Famer Bill Peterson; Parker High School, now called Robeson and at King. In 1978 he moved to Oak Park as an assistant, then co-coach and for the past 4 years the head coach. Since 1978, Oak Park has had 23 state qualifiers, with 4 state champions. Their teams have won 3 Regionals, 1 Sectional and placed 2nd in the State Duals.

Norm has been active in the Oak Park Youth Club and for 14 years he has run Tournaments for the IKWF and for the IWF, both in free style and Greco Roman.

Norm is still active in all these phases