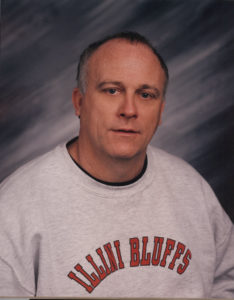 His collegiate days began at Joliet Junior College where he was on their 1963 National Championship Team and then on to Western Illinois University.

He began coaching as an assistant at Joliet Catholic High School and then moved on to Glasford, Illini Bluffs, where he started their program and has been there ever since.

His accomplishments have been many 422-119 dual meet record, 6 Conference championships, 13 Regionals, 2 Sectionals, 3rd and 5th in the state. He has had 53 State Qualifiers, 17 place winners, and 3 champions. He has had his 3 sons wrestle for him, with two of them becoming all Staters.

Pat began and continues to coach and serve the Illini Bluffs Kids program. He has served on the Central Illinois Wrestling Coaches committee since 1978.

He has been name Glasford Optimist of the Year in 1983.

He has been name Central Illinois Outstanding Wrestling Coach 6 times.

He has served on the IHSA Wrestling Advisory committee 3 years.