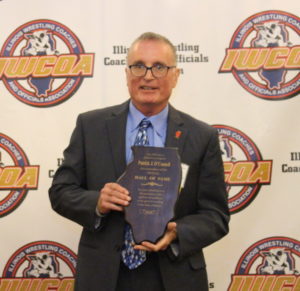 Pat O’Connell started his wrestling career at Joliet East in 1970 for IWCOA Hall of Fame coach Ron Larsen after the 4’11” 83lb freshman was cut from basketball and shown the wrestling room – “The best thing that ever happened to me.”. He went on to be a three-year varsity starter for the Kingsmen on teams that won three conference, two district, and two sectional titles.

After high school he continued his wrestling career at Millikin University where he was a four-year letterman, and in 1977 a CCIW place winner at 142 lbs. He also competed in track and cross-country for the Big Blue.

Upon graduating college in 1979 Pat accepted an assistant wrestling position at Joliet East with Sam Parker. When East closed in 1983, O’Connell moved over to Joliet Central and has been there ever since. He retired as a P.E. teacher in 2016 but is still an assistant wrestling and cross-country coach.  At Joliet Central/Township, O’Connell was an assistant under IWCOA Hall of Fame Coach Mac McLaughlin for 27 years. During his time as an assistant at Joliet East, Central, and Township he helped coach 74 state qualifiers, 26 state placers including 2 individual state champs as well as being an assistant on the 85 State Championship team and the 86 Runner-up team. Both coaches Parker and McLaughlin were huge influences on his coaching career.

In 2010, O’Connell took over as Head Coach at Central for three years. In that time, he coached five state qualifiers, all of whom placed 3rd or higher at the state tournament. He continues as an assistant coach for the Steelmen wrestling program.

Most recently O’Connell headed a committee to reinstate wrestling at Joliet Junior College, a wrestling powerhouse in the 60’s, 70’s, and early 80’s. The program had been dormant for the past 30 years. After three years of petitioning the JJC Board and fundraising, the board and Athletic Director finally agreed to reinstate wrestling for the 2017-18 season. He is currently running the weight room for the program as a volunteer assistant coach.

O’Connell has also been a volunteer worker for the IHSA at the state tournament. He has worked as a bench and a weigh-in official since 1981.

O’Connell has been married to his wife Sue, also a teacher, of 25 years. They have two children, Patrick and Molly. Patrick runs cross-country and track at North Park University. Molly, who was a scorekeeper for the Joliet West wrestling team, is studying at Eastern Illinois University.