A 2000 graduate of Romeoville High School, Paul Collum wrestled for Derek Crenshaw and John Arlis.  Paul compiled a career record of 132-8 while in high school.  He won state titles in 1998 and 1999 and placed 2nd as a senior in 2000.  In 1998 Paul won the USA Cadet Freestyle Nationals in Fargo.  The same year he placed 5th in the Cadet World Championships.  He also placed 7th in the Cadet Nationals in 1997 and 7th in the Junior Freestyle in 2000.  Paul was selected as the recipient of the Dave Schultz High School Excellence Award for Illinois in 2000.  Paul also competed in Cross Country while in high school and was a two-time conference champion.

Upon high school graduation, Paul moved on to wrestle at the University of Illinois for Hall of Fame coach Mark Johnson.  He later competed at Iowa Central College and then Missouri Valley College.  He had a combined college record of 96-15.  He placed 5th in the 2002 NJCAA Nationals and was 2003 NJCAA National Champion.  In 2005 Paul won the NAIA National Championships.  He was 3rd in the 2003 University Nationals and 5th in the 2003 FILA World Team Trials in Freestyle.

Since college graduation Paul coached at two NAIA schools while leading the Admissions offices for each. Paul began at Missouri Baptist.  He coached there from 2005 through 2011.  He then coached at Lindenwood Belleville University from 2011 to 2013, compiling a record of 20-4.  He coached 123 national qualifiers, 32 place-winner and ten champions.  He was named NAIA Regional Coach of the Year in 2013.

In 2013 he took on the role of leading National Accounts for the Fish Window Cleaning Services in St. Louis, MO.  He also serves in the capacity as business coach for this company’s 250 franchised offices throughout the county.  In addition, Paul serves as the Executive Director for two trade associations, the International Window Cleaning Association and the Power Washers of North America.  He serves as President of a Community Pay What You Can Café.

Paul’s hobbies include watching and coaching wrestling.  He and his wife, Amber, have five children.  They also serve as Foster and Adoptive Parents and will have additional children from time to time. 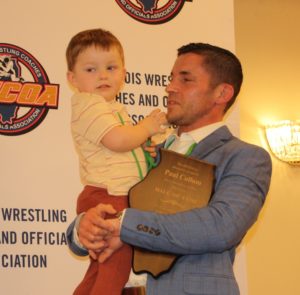