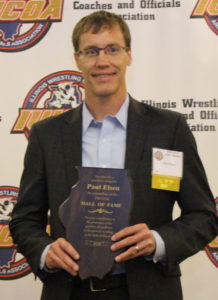 A 1993 graduate of Winnebago High School, Paul Elsen was a two-time state place-winner. He placed 4th as a junior at 152 lbs. and capped his senior year with a 28-1 record and a State Championship at 160 lbs. His two- year record was 55-6.

Elsen was a three-time All-American in wrestling with a career record of 109-19. He won the NCAA Division III National Championship at 177 pounds in both 1996 and 1997. He was also named CCIW Outstanding Wrestler in 1995 and 1997.

On the track, Elsen was a three-time All-American in the decathlon from 1995-97, including CCIW champion in 1995 and 1997. Paul was inducted into the Wheaton College Hall of Honor with the Class of 2012. He was also inducted into the NWCA Division III Hall of Fame in 2003.

One of Paul’s favorite athletic memories was winning the 1996 National Championship while being coached by his grandfather, longtime head wrestling coach Pete Willson. Elsen saw how the coaches in both sports were intentional with their development of the athletes spiritually. “I had several different coaches and, on each team, we started practices with devotions, prayer, and sometimes scripture memorization,” Elsen said. “Through my coaches, I learned that God cares about the smallest details of our lives but is more concerned about our spiritual growth and sanctification than our comfort or happiness.”