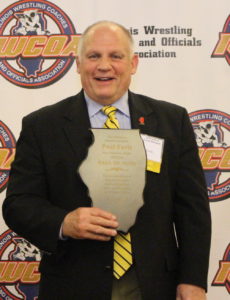 At the age of 71, as he reflects on 36 years as a wrestling coach, Paul is honored and humbled to be inducted into the IWCOA Hall of Fame. He feels extremely fortunate to have been able to develop a career as a decorated professional artist, all the while integrating his passion for wrestling.

As a 3-sport athlete at Downers Grove High School in 1963, his introduction to wrestling came late in his high school career. As a junior, after years of dedicated weightlifting, he had become the strongest kid in the school and was urged by wrestling coach, Bill Walker, to replace basketball with wrestling. Paul agreed to try it, hoping it would help him in football. Despite being able to dunk a basketball at a height of 5′ 7″, his future looked more promising in wrestling.

Paul would become a standout running back on North Central College’s football team with a successful wrestling career as well.

Paul’s first wrestling coaching job was in 1972 at Hinsdale South HS where he helped rebuild the program. In 1975 the team was 18-2, ranked 5th in state and had an individual finalist in the State Tournament. Andy Bazan took 2nd place at 145lbs and was the first wrestling state place winner in the school’s history.

In 1976, Paul was offered an opportunity to become a professional artist. He took the position at Bally Mfg. Corp creating artwork for pinball and video games. He soon became Corporate Art Director and gained domestic and international notoriety for his artwork. In the years after he left Hinsdale South, he managed his professional schedule to allow him time to coach at Wheaton North (IKWF) Falcons, PWC (IKWF) in Plainfield, Wheaton North High School Varsity and at the College of DuPage while his sons Brad and Todd wrestled there. Paul assisted IWCOA Hall of Fame Coaches Dale Pierre and Al Kaltofen and he feels extremely fortunate to have assisted and been mentored by such great coaches. In 1990, North Central wrestling coach Jim Miller asked Paul to join his staff as an assistant coach. He describes those 12 years as some of his most enjoyable experiences in coaching. His only reason for leaving North Central was to take the head coaching job he had been offered at Plainfield Central High School. In 2002, he transitioned back to teaching at Plainfield Central and would teach art once again. His successful run at PCHS included conference championships, 73 dual meet wins, 10 state qualifiers, 9 state place winners, 4 state finalists and one IHSA State Champion. In 2007, Ryan Prater became only the second wrestler in the school’s history to win a state title. Many have referred to his championship match as the most exciting scramble in the history of the state tournament.

In 2013 Paul’s grandson came to Montini Catholic to wrestle. Coach Israel Martinez asked Paul to be an assistant coach to work with the middle and upper weights. Grandson, Kegan Calkins, was the IHSA State Champion at 126 lbs. in 2014. After concluding this season with the 3A State Championship and a National ranking of #4, it has been a truly satisfying experience for Paul as he looks forward to the 2019 season.

Paul has always taken pride in his ability to wrestle “live” with his wrestlers, but as he approaches his 72nd birthday he is beginning to realize that those days are winding down. He feels fortunate to have lived his passion as a wrestler and a coach for all these years while still working as an artist who was inducted into the Pinball and Video Game Hall of Fame in 2006. Paul and his wife, Jan, have lived in the same house in Wheaton for 40 years. They have 3 children: Brad, Jana and Todd, their godson Devin, and 9 grandchildren.