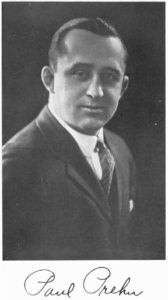 Originally from Mason City, Iowa, Paul was a wrestling standout prior to World War I. He won the Iowa Welter Weight Title prior to the War and while serving in the United States Army in France he became a hand to hand combat instructor. Still in the Army in 1918, Paul was the Wrestling Champion of the 88th Division at Camp Dodge where he had been sent to teach Wrestling, Bayonet and hand to hand fighting. In Paris he won the inter-allied Army Championship in 1919.

Upon his discharge from the Army Paul accepted a position as instructor in boxing and Wrestling coach at Illinois University. He coached at Illinois from the 1919-1920 seasons through the 1927-1928 seasons. During this time he produced 8 All Big 10 Place winners – Three of them Champions. His Teams Won the Big 10 Four Times out of the Six years he was there, the other two years they were second.

He is the author of the Successful book 11Scientific Methods of Wrestling” which was published in 1925.