Pete began wrestling in the winter of 1989 on the junior varsity squad of the Orland Park Pioneers under Head Coach Joe Tholl. There he met fellow IWCOA Hall of Fame inductee Brian Glynn. Moving to varsity a few years later he developed a love for the sport of wrestling. A few years later he qualified for the state tournament for the first of three years. The second of the three turned out to be the best in the history of the Pioneer club. A team record number of finalists and state place winners helped to secure the Novice division team championship, the first and only such award in club history.

Moving on to Carl Sandburg High School, under Head Coach Mike Polz, Pete was a varsity starter for part of his freshman year and all of the next three seasons. A state runner-up and state champion in his junior and senior campaigns, Pete had the benefit of strong lineups and knowledgeable coaches to help guide his development. His Sandburg teams made it as far as sectional duals in his freshman and senior years.

When not wrestling folkstyle, Pete began competing nationally in freestyle. Competing in the national tournaments as an individual and as part of a team a total of 5 times, and winning the consolation bracket at the National Duals in the summer of 2001.

In the fall of 2001, Pete began his college career under coaches Mark Johnson, Jim Heffernan, and Steve Marianetti. While wrestling for the Illini, Pete had the opportunity to wrestle on some truly remarkable teams. In 2003, the Illini were ranked #1 in the country, the only time an Illinois wrestling team attained that ranking. Pete played an important role in three consecutive Midlands titles from 2003-05 and culminating in the first Big Ten team title for Illinois in 53 years. Pete was a three-time All-American and he ranks third on the Illini career win list. Pete would be the first to admit, if not for the great teammates he had the fortune to share the mat with, from junior high, high school and college, several of whom are in this room, he would not have been able to achieve any of his individual success.

After his competitive wrestling days, Pete coached at Appalachian State and then at American University,

Washington DC, where he coached 3 All-Americans and 2 EIWA conference champions. He then had the opportunity to coach with fellow Illini alumni, Alex Tirapelle, at the University of Pennsylvania. Pete currently lives in Baltimore, MD. and is married nearly 2 years to Morgan Munoz. He is coaching wrestling at the St. Paul’s School for Boys.

Pete is very grateful for, and attributes his success, to the help and support of his friends, family, and loving wife. 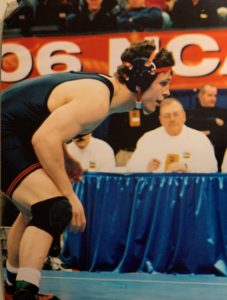