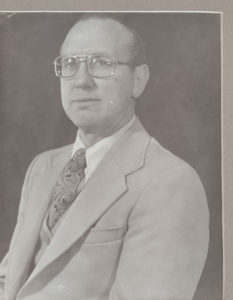 His coaching career began at Blue Island, where he developed 15 place winners,

3 of who were State Champions. His teams won many awards and finished 3rd in the State in 1956.

He left Blue Island to assist in the Wrestling Program at Wheaton College in 1964, a program he took over in 1974. He still maintains this program today. His college teams have maintained the same excellent quality that Wheaton College has been known for. He has had Five National College Division Three Place winners. His Wheaton Team has won Two College Conference of Illinois and Wisconsin Championships.

As he begins his 26th year of teaching and coaching, many other awards have come to him which includes:

Wheaton College Hall of Fame as a Wrestler; 25 year Service Award from the

Through Mr. Willson’s leadership, Wheaton College was selected for the site of the 1978 NCAA Division Three Championships, which I might add was run off in excellent form.

Mr. Willson has also done a considerable amount of officiating and for a few years aided the IWCOA in the officials’ instruction programs. Retired 1990 and grand marshal 1991.