Born in Hoffman Estates, Peter Marx graduated from Conant High School in 1994.  While in high school, he wrestled for IWCOA Hall of Fame coach Jim Cartwright.  He placed 4th in the state as a sophomore and then won back-to-back titles his junior and senior season.  During his four years as a Cougar, he compiled a 145-25 record with 85 straight wins his junior and senior years.  He was named Asics All American in 1994 and was a two-time USA Junior National Place-winner.  In 1993 he earned All-American status by placing 5th and then placed 3rd in 1994.  He also played football in high school and was named All-Conference two times and All-Area and All State in his senior year.

He went on to the University of Illinois and competed for the Illini and Hall of Fame coach Mark Johnson, compiling a 28-12 record.  He later went on to Western Illinois and then Illinois College and played football.  He graduated in 2001 with a major in history and later earned a Masters’ Degree in Education.

Peter joined the coaching staff at Ottawa high school and has been coaching in Illinois for 21 years, 17 years as a head coach.  He has helped to create a strong wrestling program at Ottawa High School.  While an assistant coach, Ottawa their first state finalist since 1966.  During his tenure as a head coach, he has a dual meet record of 211-113.  He is only the second coach in school history to win more than 100 dual meets.  His teams have won two IHSA regional titles, the first in school’s history.  He has coached 31 state qualifiers and 18 state place-winners.  Peter also coached the Pirates to their first conference wrestling championship.

Peter has also taken the lead in establishing an area wide summer program than aims to grow wrestling, not just in Ottawa, but in the Illinois Valley area.

A long time IWCOA member, Peter has been nominated for Class 2A Coach of the Year twice. 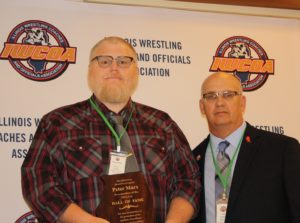