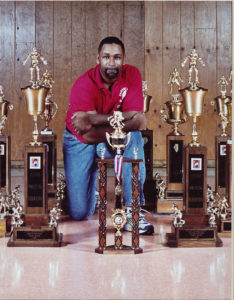 Born in Chicago, Quintroy Harrell attended Thornwood High School and wrestled for four years for Jarrett Hubbard. He was Captain his senior year. He also played football and ran track. Quint went on to the University of Wisconsin at Superior. He wrestled for two years and compiled a 64-13 record. He was also team captain while at UW Superior.

Quint has been the head coach of the famed Harvey Park District’s Twister Wrestling Team for the past twenty-one years. During this time period, he has produced an unprecedented number of IKWF state champions. Seventeen of his Twisters went on to claim state titles and six won NCAA titles.

Channel 5 News of Chicago featured Quint in its series “Someone You Should Know”. He has also served as Grand Marshal of the IKWF State Championships.