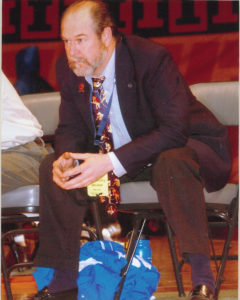 Randy Swinford began wrestling for Irv Johnston while attending Elgin High from 1968- 1971. He enrolled at Eastern Illinois University in 1971, receiving a Bachelor’s in Education in 1976. He received a Masters in Industrial Technology in 1977.

He was hired at Princeton High School in the fall of 1976 as an instructor, assistant wrestling coach and assistant football coach. He took over the head wrestling position in the fall of 1982 and has remained head coach at Princeton High School the past 23 years. His current dual meet record is 304-226-3. He has coached thirty-eight state qualifiers (26 in Class A and 12 in Class AA), sixteen state place-winners and six State Champions. He has coached two Class A regional championship teams and one Class AA regional championship team.

Randy has coached football at Princeton for nineteen years and was head coach from 1989 to 1994. He led the Tigers into the playoffs twice, and coached Princeton to the Class 3A Runner-up in 1989.