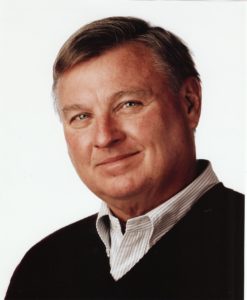 Born in Chicago and a 1964 graduate of Mt. Vernon, IA, Reid Hanley lettered in football, baseball and golf in high school. He attended Wichita State University and graduated in 1970.

He began his career writing for the Wichita Eagle for seven years. Reid went on to become a sports writer for the Chicago Tribune and for twenty-nine years he covered college football, wrestling, basketball and golf. He was selected as National Wrestling Journalist of the Year in 1998 by WIN Magazine. Reid was named by the IWCOA as Newsman of the Year in 1979 and 1980. He was also inducted into the Illinois Coaches Association Golf Hall of Fame.

In 1973 Reid authored “Who’s Who in Track and Field”. He also co-authored, with Tom Jarman, “Wrestling for Beginners”. This book gives the novice the basic fundamentals of wrestling which serve as a foundation for all instruction. It included conditioning, moves, holds, takedowns, counters, strategy and pinning combinations.

Reid is a member of the Golf Writers Association of America and enjoys golf and travel.