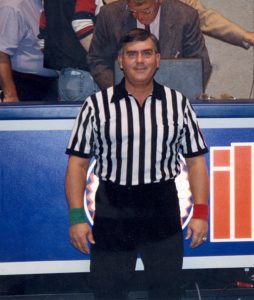 Renny began his career in Ohio; where he was a two time State Qualifier. His collegiate day’s sere spent at Eastern Illinois University, where he lettered in Wrestling and soccer.

Upon graduation, Renny was responsible for developing the entire Wrestling program, from elementary through high school. In 1976 the programs were dropped due to budget restraints, but Renny still continued to coach two blind wrestlers who competed in the blind Wrestling championships that year.

This is Renny’s 23rd year as an official with the IHSA. He has officiated the State Finals, both individual and duals 9 times. He was named Official of the Year by the IWCOA in 1992. He has also been a Rules Interpreter since 1992.

Renny has been an Official Clinician at the local, state and national level and was recently elected President and Supervisor of Officials for the newly organized Big Ten Wrestling Officials Association.

In 1979 the Community of Charleston honored Renny with their Community Distinguished Service Award.

In 1990 Renny was inducted into the Eastern Illinois University Hall of Fame.