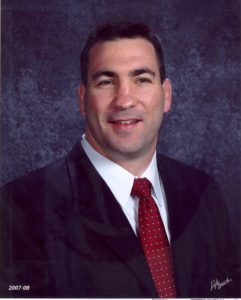 Following a P. E. unit on wrestling during the 1981-82 school year, Tim Haak (like all good wrestling coaches are apt to do) encouraged individuals in whom he saw some potential to “try wrestling.” Tim had one of “those” conversations with one of his students — Rich Powers. Tim certainly had Rich pegged correctly — only I not sure that he envisioned Mr. Powers heading off to attend Marian Catholic in near-by Woodstock.

Rich Powers enrolled at Marian Catholic and four years later exited with a record of 137-12 (including 113 falls), two State Titles and one 3rd place finish. He was selected as the Outstanding Wrestling in Class A by the IWCOA in both his junior and senior years (during which time he went 74-0). Yep Tim, you did have it right.

But his Marian Catholic accomplishments were but the tip of the proverbial iceberg. In the international styles of Freestyle and Greco Rich Powers also excelled. Rich won the Prairie State Games Greco title in 1985 and 1986; the Prairie State Games Freetstyle Championship in 1987; the IWF State Freestyle and Greco Championships in 1987 after he had placed 2nd in the IWF Freestyle Championship in 1986; earned All-American status when he placed 2nd in the Junior Nationals at 178 lbs.

Rich continued his success at the collegiate level. Recruited by the University of Northern Iowa and its coach Don Briggs. Rich posted 134 wins in his college career with fifty-four of those wins coming via pins. He was a four-time Midwest Regional Champion — twice being named the Outstanding Wrestling of the meet. He won four Northern Iowa Open Tournaments; two Nebraska-Omaha Tourneys; and two Northern Opens. Twice Rich placed in the prestigious Midlands — 3rd in 1990 and 1st in 1991. He was a three-time All-American, placing 4th, 5th and 4th at 177 lbs. He was Captain of the UNI Panthers his sophomore, junior and senior years and was selected as the team’s Most Valuable Wrestle in both his junior and senior years. Rich was twice selected to wrestle in the National Wrestling Coaches Association All-Star Dual meet.

Shortly thereafter, Rich returned to Illinois, assuming a position as a teacher and coach at Rolling Meadows High School. He moved next to Palatine Fremd as a teacher and later as the Assistant Principal. Since his UNI days Rich as acquired a Masters degree and, in 2004, his Doctorate in Educational Leadership.

He currently is the Principal at Cedar Falls High School in Cedar Falls, Iowa where he lives with his wife, Kristi, and their two children, Olivia and John.