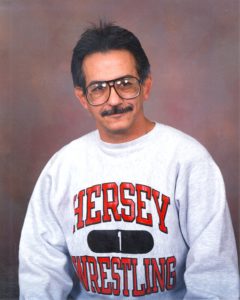 Rick began his Wrestling career at Morton East High School, where he was a State Qualifier. His Collegiate Career was at Illinois State, where Wrestling for Hall of Famer Dr. Robert Koehler, he became a Two-time IIAC Champion.

He began teaching at Hersey High School as an assistant to Hall of Famer Tom Porter from 1969 to 1973. In the fall of 1973 he became the Head Coach at Hersey. His teams have been consistently in the top 3 in the Conference. He has had J 2 State Qualifiers, with 9 of them Place winners. His team placed 8th in 1981 and in 1993 his team was one of the Elite 8.

He has been President of the Illinois Coaches and Officials Association, 1983-841 and served as the Past President in 1984-85.

He has worked as a Bench Official at the State Meet for 4 years and has been a Regional Representative to the State 5 times.

Rick was an Assistant Free Style Coach for the Illinois Wrestling Federation during the Junior Nationals for 3 years and served as the Head Free St1f.le Coach for two years.

He has hosted the International Clubs Cup Championship in Free Style and the National Greco Roman Individual Championships.

In 1984 he served as the Press Attaché at the Olympics in California. The Illinois Coaches and Officials Association recognized him as 11 “Man of the Year” in 1987.

Rick Mann began his wrestling career at Morton East High School. He was a state qualifier his senior year. He wrestled at the college level at Illinois State University. He was a two-time IIAC Champion while wrestling for Hall of Fame coach Dr. Robert Koehler.

In 1969 he began teaching at Hersey High School in Arlington Heights. He served as an assistant to another Hall of Fame coach, Tom Porter, from 1969 to 1973. Since becoming the head coach in 1973 his teams have been consistently in the top three in the conference. He has had over forty state qualifiers, fourteen state place-winners and one state champion. His teams have won over 246 dual meets, seven regional championships, two conference titles, and qualified for the final eight in the I.H.S.A. Dual Meet State Tournament twice. Rich has hosted the International Clubs Cup Championship in freestyle and the National Greco-Roman Individual Championships. Rick has served and an assistant for the Team Illinois Junior Nationals squad for three years and was head coach two years.

Rick served as president of the IWCOA in 1983-84 and was past-president in 1984-85. He was also on the I.HS.A. Wrestling Advisory Board from 1987-1990 and has worked as bench official that the state meet for many years. In 1984 he was the Press Attached at the Los Angeles Olympics.

In 1987, Rick was named Man of the Year by the IWCOA and he was inducted into the IWCOA Hall of Fame in 1993. He served as Grand Marshal at the I.H.S.A. Individual State Tournament in 1999.