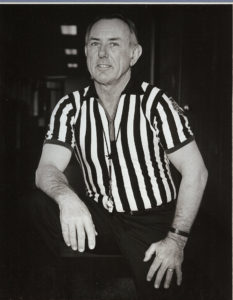 Dick has coached for 30 years in all Sports. 18 of that 30 has been in Wrestling; 14 of those years as a Varsity Coach. H spent 7 years as the head coach at Arlington Heights and 7 years as the head coach at Prospect. All told, he has won 122 dual meets; 5 Conference Championships; a number of Regionals; 1 Sectional; Has had 13 State Place winners and numerous Qualifiers with 1man becoming a State Champion. Dick has been an official for 18 years; He worked 10 Regionals; 8 Sectionals; and 3 State Finals. He also worked Big 10 meets and the Midlands. He was a Rules Interpreter for 10 years. Dick was also on the State Wrestling Advisory Committee for 3 years.

Dick was an Officer in the MidStates Wrestling and Officials Association, forerunner of the present IWCOA for many years. He also has written many wrestling articles, both on technique and officiating. Dick was the main instrument in starting the Youth Programs in the respect area. All of this from a man who began his career in a Chicago High School and the University of Illinois where he did not wrestle.