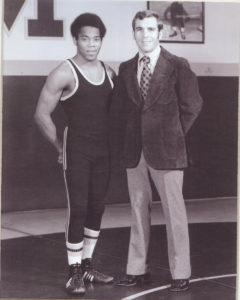 Rick is a graduate of Waukegan High School and Michigan University.

While at Waukegan High School, he became the 3rd three time State Champion in Illinois and had the unique experience of winning those titles under the leadership and guidance of his father, the late Ott Bay, who is also a member of this Hall of Fame.

While at Michigan, Rick was Captain of his team, a two time Big 10 champion and a fifth place winner in the Nationals. After graduation, Rick stayed at Michigan as Mr. Cliff Keenes assistant and took over the Head job when Mr. Keene retired. Rick’s team won the big 10 championships this year and finished 3rd in the National where he has his first National Champion, Jarret Hubbard of Joliet, Illinois. Served as Grand Marshal in 1991.