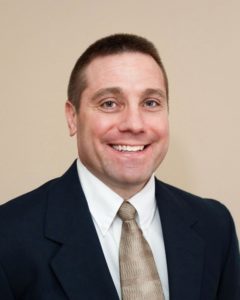 Rob Ledin began his wrestling career in 1976 as a Vittum Park Viking in the Chicago Park District. Donald Ledin, his father and Hall of Fame member, coached Rob to two state tournaments including placing 6th in 1981. A 1985 graduate of St. Laurence High School in Burbank Illinois, Rob lettered in wrestling three times. In his senior season he was named Captain and won the Chicago Catholic League Championship and the Regional Championship under, then Head Coach, Robert Trombetta. Rob went on to wrestle at Illinois State University earning his Varsity “I” under Hall of Fame Coach George Girardi. Rob received his Bachelors Degree in Education in 1990 and later earned his Master’s degree in Educational Administration from ISU in 2006.

In 1990 Rob began his coaching career at Hinsdale South High School as, first, a student teacher and then as an associate dean and assistant wrestling coach under fellow inductee Mike Matozzi. After two seasons, Rob left Hinsdale South to pursue a job in the Chicago Park District where he began an IKWF Club at Archer Park. In 1994 Rob moved to Normal Illinois where he taught Physical Education, Health Education and Driver Education. He also coached the sophomore football team and was the assistant wrestling coach for Normal Community High School.

Rob received his first head coaching position at Clinton High School in 1995. While at Clinton he coaching football and wrestling. During the next 8 years at Clinton produced an IHSA Dual Team Runner-up finish in 2000 and a Third Place finish in 2001. During his tenure at Clinton, Rob’s teams produced five OKAW Conference Championships, three IHSA Regional Championships, 36 Individual State Qualifiers, 14 State Placers, five State Champions and 131 dual wins. In 2000 Rob was named IWCOA Head Coach of the Year and in 2000 and 2001 he was chosen as the Decatur Herald & Review Head Coach of the Year. In 2001 Rob was selected to coach the Illinois Senior All-Stars in the Illinois vs. Indiana Classic Duals. In 2003 Rob took the Head Coach position at Morton High School in Morton Illinois and coached four State Qualifiers and one State Placer.

In 2006 Rob was hired by Hall of Fame Coach, Marty Williams, to take the helm at Mahomet-Seymour High School where he currently resides. Rob presently teaches at the Alternative School and serves as the JV Football Coach and Head Wrestling Coach. Since that time Ledin’s teams have won five Corn Belt Conference Championships, three Regional Titles and a trip to the Elite 8 in 2009. Rob was chosen to coach the Central Illinois All-Stars in the 2009 Cross State Classic. To date at Mahomet-Seymour, Rob has coached 17 state qualifiers and two State Placers including a State Champion.

Rob has served as an IWCOA Executive Board member since 1999. In 2001 Rob was elected Secretary and in 2009 he was elected President, the office he currently holds. Committees under which he has served include: Classic Duals, Fresh./Soph. State Series, Membership, Midwest Nationals Tournament, Hall of Fame Selection, Publicity/Web Page, and Coaching Clinics.