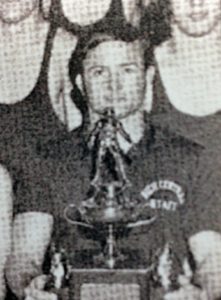 Somewhat unlike today, multiple-sport athletes were more of the norm in the late ‘50s and early ‘60s; but Robert Campbell was still an exception even then. Bob participated in four different sports¬ – football, wrestling, baseball and track! However, it was wrestling that proved to be Robert’s best calling. He was crowned Conference Champion three times; won one IHSA District (now Regional), one Sectional and qualified twice for the IHSA State Finals (all in the era of one class and when only two per weight class qualified from the IHSA Sectional).

Robert went on to attend and wrestle for Indiana University in Bloomington. While at Indiana University Robert twice placed second in the Big Ten Championships. In the 1964 NCAA Tournament held at Cornell University, Robert earned the first of his two All-American honors when he finished in sixth place in the 130 lbs. weight class. In the 1966 NCAA Tournament, held this time at Iowa State, Robert garnered All-American recognition when he placed third in the 130 lbs. weight class.

Robert acquired his Bachelor’s degree in Education in 1968 from Indiana University and elected to remain in Bloomington as an assistant wrestling coach for the next two years.

Following this brief stint at Indiana University, Robert migrated back to the south suburbs and took a position at Rich Central High School… and, of course, he became the school’s wrestling coach. He would remain as Rich Central’s wrestling coach for the next ten years. During this period Rich Central won seven Conference Championships, one IHSA District (now Regional) and one IHSA Sectional Championship. In 1974, the first year of the two-class state tournament, Rich Central, under the guidance of Robert Campbell, out-distanced Oak Lawn, Joliet West and Elk Grove for the IHSA State Championship. In recognition of his accomplishment, the IWCOA honored Robert Campbell as the 1974 Coach-of-the-Year.

Robert Campbell and his wife Sandie currently reside in Lakeside, California, where – rumor has it – Bob enjoys a round or two of golf on occasion.