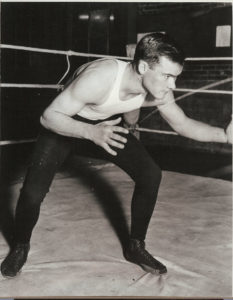 Bob is from Lawrenceville and the University of Illinois.

Bob wrestled long before they had State Championships. While in college, he became what was then the 1st 3-time Big 10 Champion and as a senior finished 2nd in the National Collegiate Tournament.

He began his coaching career in Lawrenceville in 1937 and culminated it in 1964. During his tenure at Christman, Bridgeport, Lawrenceville and Arlington Heights he developed a 65 per cent dual meet winning record. While at Lawrenceville, his teams finished 3rd, 4th and twice runner-ups in the State Wrestling Championships. Throughout his coaching career he developed 25 state place winners of which 9 were State Champions. That list included Bob Strange who was the first 3 time State Champion in the State of Illinois. There have only been three.

Bob was also a well know official in the area and worked the State Meet five times.