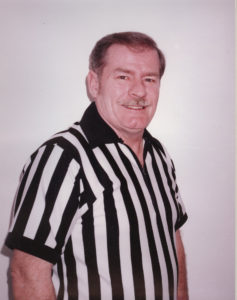 Bob began his Wrestling career at Decatur Eisenhower, where he was a State Qualifier.

.Following High School he enlisted in the Marine Corps where he participated in and coached the Hawaiian Marines Wrestling Team. He also officiated the Hawaiian State Finals.

Returning to Decatur after his enlistment was up, Bo helped with the Clinton High School program. He then turned his efforts towards the Decatur Wrestling Club which was sponsored by the YMCA. Here he teamed with Clifford Sheets, a Hall of Famer, and got involved with officiating.