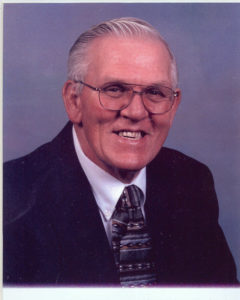 Robert “Moose” Handlin is the only coach in the history of Mahomet-Seymour High School athletic programs to serve on staff of three different state championships. Moose was defensive coordinator during the Bulldogs 1977 state championship football season. He was the head wrestling coach who started the long tradition of individual state champions, and he led the girl’s track team to back to back Class A state championships in 1979 and 1980.

A 1958 graduate of Illiopolis High School, Moose participated in football, basketball and track all four years. He held the Sangamon County shot put record for twenty years. He attended Lincoln Land Community High School and then Eastern Illinois University. He competed in track while at EIU. He later received his Master’s degree from the University of Illinois.

Moose was head wrestling coach from 1972 through 1981, with an overall dual meet record of 130-48-1. His teams finished 1oth in the state meet in 1975 and 1978, 5th in 1979, and 3rd in 1980 and 1981. He coached twenty-three state qualifiers, eleven place­ winners and five State Champions. His teams won three regional titles and one sectional championship. He coached Mahomet’s first state place-winner and first state champion. He also coached the first twenty dual meet wins of the state record 109 from 1980 through 1985.

Moose taught at the junior high for many years, later serving as both vice-principal and principal at Mahomet-Seymour Junior High School. Moose passed away this summer, a year after he had retired from eleven years as principal of Delphi High School in Delphi, Indiana.