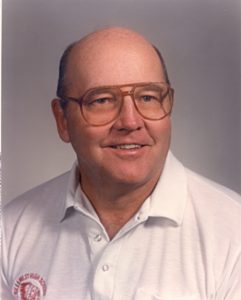 Bob began his Wrestling career at Joliet Twp. High School. He later went on to Illinois University, where after wrestling for 1 year, changed over to Swimming. Graduating from Illinois University he began teaching at Niles West High School where he was the Coach of the Varsity Wrestling Team, a career that spanned 27 years. During this time His dual meet record was 143 wins. He won 4 Conference championships; 3 Regionals. Had 30 State Qualifiers, with 11 Place winners, including his two sons.

Over the years Bob has run summer programs; worked as a coach at wrestling camps and has been host to free style tournaments.

In 1987 the Pioneer Press named him Coach of the Year for that area.

This award is given annually to a senior varsity wrestler who demonstrates through his words and actions the qualities held in highest regard by Nil West’s Hall of Fame head wrestling coach, Robert E. Porter. These qualities are self-discipline, sound moral values, dedication, leadership, and motivation.