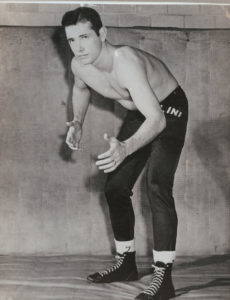 Bob was the first Three time State Champion in Illinois. He won his titles at 115 in 1939; 115 in 1940 and 12.5 in 1941. After high school, he entered the University of Illinois, where he was a member of the Wrestling team. He entered the service from High School and after the war he returned to the wrestling team. He was injured in the 1950 nationals, which finished his career. After graduation, Bob entered the coaching profession and until recently coached at Lawrenceville. He is now teaching and although not active as a coach, he has kept active in the field of wrestling.